Nissan Seminar: Reality, Technology and Power: the deep relationship of modern Japan with Physics and physicists

Reality, Technology and Power: the deep relationship of modern Japan with Physics and physicists

The complex social dynamics of the world have been modulated by the knowledge and the technologies created by physics, from electricity, relativity and quantum mechanics to nuclear physics and computing.  But, perhaps Japan, more than any other country has shaped its modern identity, sense of pride and even destiny by its ability to do both theoretical and applied physics. Japan wanted to be at the forefront of physics,  not only for the economical and military power it unleashes, but also as a tool to reconnect with Japan’s pre-modern world’s vision of nature and how humans (and Japanese) relate to it. As a result, modern physics was transformed by Japan. Japanese (mostly male) physicists  succeeded to intertwine Japan’s cultural history and identity with physics, focusing on problems of “complexity” and “intelligence”, doing physics that was conscious of its interconnectedness nature. The future looks uncertain, Taiwan and South Korea have overtaken Japan in many key areas, however, Japanese physicists are once again striving to tap into their deep cultural reservoir, as they attempt to fuel Japanese intellectual leadership in crucial future technologies, such as quantum computing and bioinspired technologies.

Sonia Contera, is an experimental physicist, working at the interface of physics, biology and nanotechnology. She is Professor of Biological Physics and Associate Head of the Physics Department (ED&I) at the University of Oxford. She studied in Madrid, Moscow, Prague and Beijing before obtaining her PhD from the Department of Applied Physics of the School of Engineering of Osaka University. She is the author of “Nano comes to life: How nanotechnology is transforming medicine and the future of biology” (2019). She has a strong interest in understanding how physics connects modern, pre-modern and ancient worlds. 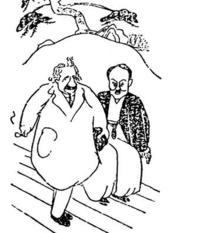 Japanese cartoon of Einstein with Jun Ishiwara, his former student during Einstein’s visit to Japan in 1922. The two physicists (holding hands?) test the sound frequencies emitted by floorboards in the "Nightingale Walk" at Chioin Temple 知恩院 in Kyoto.